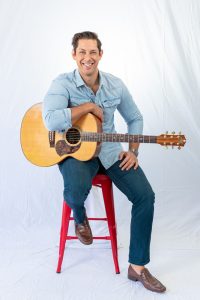 In an industry quick to categorise, Adam James stands out as a recording artist with a vast musical talent. Merging his indigenous identity, country roots and blues fervour he has created a sound that is undeniably Adam James.

Best known in Australia for his impressive debut on the country music scene, James has taken a recent stylistic shift and unleashed his inner blues. His third studio album signals the transformation of Adam James into a bluesman, sophisticated storyteller and a pioneering indigenous artist with very few peers.

A singer, songwriter and dynamic live performer, James has gained a reputation as a favourite on big festival stages as well as intimate gigs thanks to his melodious voice and effortless on-stage appeal.

The musical journey of Adam James has seen him go from his home country of Minjerribah (North Stradbroke Island) and a rural upbringing in New South Wales and Queensland to awards stages and hallowed blues ground in Nashville.

Truth and storytelling are common themes in James’ work and to see him play live is to witness an Australian musician who has realised his own truth. Authenticity breeds connection and audiences at any of James’ live performance can’t help but engage with an artist of such conviction.

Recognised as one of the rising stars of Australian independent music, James has recorded and collaborated with legends from both the Australian and American music scene.

James first studio album, Messages and Memories (2007) was a hearty nod to the Australian country sound and a fitting soundtrack to the dusty landscapes of his northern NSW upbringing. The success of The Country Singer (2008) and 2012’s Children of the Sunrise earned him the right to play at some of Australia’s major festivals including Woodford Folk Festival, The Dreaming Festival, Canadian Aboriginal Music Week, Tamworth Country Music Festival, The Gympie Muster and Clancestry to name a few. In 2015, James won TSA’s best Alt-Country-Blues artist.

If country music was James’ wife, then the blues has always been his mistress. And with the release of his third studio album, Russian Blue, James has succumbed to his desires and recorded his first blues and roots album. Recorded on blues holy land in Nashville’s The Sound Emporium, James has connected with long-time producer Stuie French and a backing band of local greats whose veins bleed the blues.

The result is an effortless bringing together of James’ trademark sincerity and storytelling transitioned into a new deeper, soul-inspired sound.

The album explores themes of coming to terms with profound human experiences and facing up to truths, as difficult as that may be. It is poignant that James finds himself in

Nashville, the very place where Henry Howden coined the term, “three chords and the truth” to create his watershed album. The true meaning of Howden’s oft-quoted music trope refers to getting back to the place you belong, and for James the synchronicity is perfect.

Taking nearly five years to write, the new album gave James a chance to unpack the heavy emotional toll of surviving the 2017 Barcelona terror attack. If ever James needed a reason to seize the day, his experience in Barcelona was it. The result is James’ catharsis, yet there is clearly joy here. Joy that can only come from an artist who is finally doing the thing he loves most.

As a man of Quandamooka Country heritage James maintains a strong connection with some of the most disadvantaged members of the Australian community in his role as a Director of the non for profit charity Uncle Jimmy Thumbs Up! Through music and song writing, the charity helps indigenous students and families across Australia discover good nutrition and positive life choices. Adam has also initiated an amazing new venture to protect indigenous art called Indigiledger.

As James shifts into a new musical home, he has found a perfect setting for his beautiful voice to shine through. This can only mean more audiences will soon discover the incredible talent of Adam James.

Adam James is an Australian singer songwriter and indigenous artist whose on-stage appeal sees him connect with audiences of all sizes. Since 2007, Adam James has performed his unique style of country, blues and roots music for corporate events, festivals and private venues. His versatility and diverse musical talent have seen him become a sought-after musician for hire. If you are looking for an energetic and exciting blues artist to play a corporate event or want to hire an award-winning Australian musician get in touch today.